What is a TRIODE and how does it work?
The importance of the Grid

A TRIODE is an electronic amplifying device belonging to the vacuum tube family.
In electronics, a VACUUM TUBE is a device that controls electric current flow in a high vacuum between electrodes to which an electric potential difference has been applied.

There are many types of vacuum tubes depending on their use. They are essentially used for a number of fundamental electronic functions such as SIGNAL AMPLIFICATION and CURRENT RECTIFICATION.
JAES, in its catalog, offers a wide range of triodes from different manufacturers.

In the Anglo-Saxon Countries the triode is simply called “valve”, since it allows to vary the current that passes through it. Very often to explain the basic principle of its operation, the triode is compared to a tap that control the release of a liquid or gas.

The triode was born as a natural evolution of the diode.
As we already explained in our previous video, the function of a diode is to allow the flow of electric current in one direction and virtually block it in the opposite direction. The diode is in fact mainly composed of two electrodes called ANODE and CATHODE. The electron flow conventionally goes from the chatode to the anode following this direction. Opposite polarization of the diode will oppose a virtually infinite resistance. The diode blocks the current reducing it to zero.

Unlike the diode, the TRIODE (as the name suggests) is provided with a third electrode placed between the CATHODE and the ANODE called: CONTROL GRID. All these elements are placed inside a tube in which a vacuum has been created, which means that all the air and other gases have been removed. 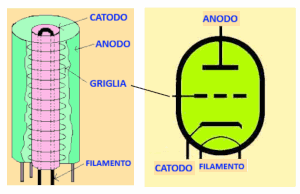 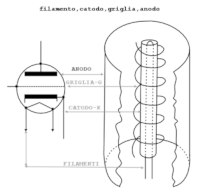 For a triode to actually work, it is necessary to create a STRONG POTENTIAL DIFFERENCE between its anode and cathode. For this reason the CATHODE is heated by a separate current flowing through a thin metal filament, in order to emit electrons via thermionic emission.
In this type of triode the GRID usually consists of a cylindrical screen or helix of fine wire surrounding but never touching the cathode. The grid acts like a gate for the electrons, controlling the current flow and thus allowing signal amplification.
Around the grid is placed the ANODE which receives the electrons emitted by the cathode.

This is a fairly simplified representation of the triode. Which means that only the basic elements of the tube are shown, as we can also notice in its symbol, where the cathode and the anode are separated by the grid, which is represented by this dashed line.

As in the diode, the anode collects the electrons emitted by the cathode, which are not hindered by the grid, since they can easily pass through its coils.
However, the grid can significantly influence the movement of the electrons towards the anode, if there’s an electric potential difference between the grid and the cathode. Basically, when there’s no voltage on the grid, the current between the cathode and anode will be at its maximum. On the other hand, a less negative, or positive voltage on the grid will allow more electrons through. Let’s see how:

We can observe how the grid is able to vary the current flow by drawing the characteristic curves of the tube:

Now we are going to apply DIFFERENT VOLTAGE VALUES between the anode and cathode to find out the corresponding CURRENT. The applied voltage is called ANODE VOLTAGE, while the current flowing through the tube is called ANODIC CURRENT.

When the grid and cathode have the same electric potential, then the triode can be compared to a diode, that’s because the grid does not affect the anode current. We obtain a characteristic curve (image above) which is similar to the curve of a diode.

It is necessary to bring the grid to a different electric potential than the cathode, in order to observe its influence on the anodic current. So let’s try to connect a battery between these two electrodes.

Looking at the scheme (3b) we can observe a very important fact:
As we’ve already seen, we can reduce the anodic current from 12 milliamps to 6 milliamps, by just bringing the grid voltage from 0V to -2V and thus leaving the 100 V anode voltage unchanged.

However, the anodic current can be reduced in the opposite way, by changing the anode voltage and leaving the 0 V grid voltage unchanged.

In this case the triode shall operate under point C conditions (3b), in which the ANODIC CURRENT is 6 milliamps and the GRID VOLTAGE is 0 V. In this scheme (3b) we see that this can be achieved by reducing the anode voltage from 100 V to 60 V. Quite a big variation, don’t you think?

Thanks to the small distance between the grid and the cathode, the grid has a more effective action on the anodic current compared to the anode, which is further away from the cathode.

We can conclude by saying that the triode grid is able to control the anodic current by changing its own voltage.